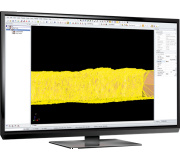 Deswik Product Manager - Survey Stephen Rowles says the new Deswik.AdvSurvey module, rolled out in April 2019, has been designed to reflect the changing scope of survey in mining.

“Three years ago, we released our core survey functionality within Deswik.CAD which was developed in conjunction with a number of client sites, including one in Western Australia,” Rowles says.

“This new functionality takes it to the next level. Most sites are using scanners and/or UAV’s to complement their current survey methods.

“They are using these tools to improve existing survey practices, and in many cases, they see both improved efficiency and increased safety by removing surveyors from operational areas in the field.”

“As-built surveys of underground development typically provide two key pieces of information for other departments: a wireframe and an outline of the development. We created a set of very specific functions to meet these requirements,” he says.

“Sometimes the point cloud can be quite clean but there is usually some obstruction, vent bag, services etc that need to be removed. We needed a way to take the scan points and generate a high-quality, clean wireframe and outline.

“Our algorithm takes the points and generates a wireframe of the scan. The wireframe is more complex and uses tailored functions within the software to clean out as much noise and obstructions as possible. It eliminates much of the manual work.”

With the new technology, users can import LAS files, choose the meta data options, modify them using a clipping box and remove points based on the value of the point such as colour and intensity.

The software was developed in Deswik’s Brisbane head office during the course of a year using feedback from a variety of surveyors around the world.

“We just didn’t want to rely on what we thought was needed” Rowles says, “We got feedback from many professionals/surveyors around the world. It has been industry input.”

He says the benefits to Deswik users will be huge.

“We have massively increased our ability to handle large data sets up to 200 million points in Deswik.CAD.” he says.

“The scanners generate massive amounts of data in a very short time period. The key was to take the large datasets and generate useful information for the operation without relying on manual processing.

“If sites are scanning, once they have a *.LAS file they can import it into Deswik.CAD.”

Rowles says the next stage, to be rolled out later this year, will be looking at introducing the software to open-pit mines, with the technology already being piloted in South Africa by the Deswik survey team and other peer surveyors.

“We started with underground because that’s where most of our survey implementations have been, but our roadmap includes plans to put in functionality for open-pit,” he says.