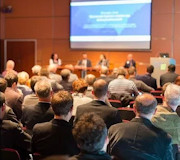 The aim of the workshops was to inform stakeholders of the proposed framework of the WHS (Mines) Regulations, and provide opportunity for appropriate feedback on key themes.

The Mines Safety Directorate (Mines Safety) of the Department of Mines, Industry Regulation and Safety organised the stakeholder workshops to facilitate consultation on proposed concepts for the mining specific regulations. The workshops are to assist in preparing the discussion papers to be circulated for public consultation in early 2019, when all stakeholders will have the chance to provide comment on the WHS (Mines) Regulations. Submissions will then be compiled into a report for the Minister.

On 12 July 2017, the Government announced that modernised health and safety laws would be developed for Western Australia:

In 2016, WHS (Resources and Major Hazards) Bill was being developed, which was to be supported by WHS Regulations for resources (mining and petroleum). For the development of mining-specific regulations, stakeholder workshops were conducted in 2015-16. These regulations were to be based on model WHS Regulations, including Chapter 10 (Core) and National Mine Safety Framework (NMSF) drafting instructions (DI).

The three major mining States (Western Australia, New South Wales and Queensland) agreed to base their WHS mining regulations on the model WHS Core regulations (Chapter 10) with additional provisions based on NMSF DI. These are in addition to the general industry model WHS regulations that will apply to all industries including mining.

If anyone is interested in learning more about the current process and status of the proposed WA Act and Regulations then please contact: