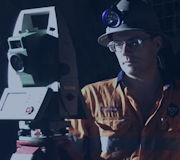 Built on the powerful CAD and plotting engine, the new functionality includes: survey job management, in-built stations database, attribute values varying along polylines as well as advanced features such as automatic solids creation from tunnel as-builts. These allow for dynamic data updating and rapid plot generation.
In May 2015, Stephen Rowles and Luke Waller from Independence Group NL began work at the new Nova Project in Western Australia. They were tasked with setting up best of breed systems for the survey department. As Deswik was already in use by the planners, its survey functionality was reviewed and found to show potential. Working in conjunction with the Deswik development team, their core CAD platform was enhanced to suit the site needs and simplify the typical surveying processes.

“At Nova, we began working with Deswik in July 2015, the purpose was to provide technical assistance to the development team to create a platform for underground surveying” explains Stephen Rowles, Senior Surveyor at the Nova Project. “This would allow data in the mining sequence to flow seamlessly between the departments, while at the same time performing all of the functions that we need as surveyors. Several core software functions have been built into the CAD package which has improved our processing time and the integrity of the data. The lateral development side of Deswik.CAD is now robust and a proven commodity, we are now focusing our attention to the production side of the package and get it to the same standard already in place.”

“The feedback on site has been very positive from all parties involved and we are looking forward to building on the quality product that is already in place. The opportunity to create a new survey package has been a rewarding endeavour and being the first mine in the world to use this for surveying is quite an experience”.

The survey functions in Deswik.CAD enable data generated by the engineers and surveyors to be used by each other without the need for file conversions. This has allowed seamless integration when transferring data between the mining departments.

For more information, go to: