Rio Tinto to Expand Use of UAS 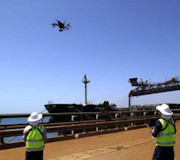 Rio Tinto is moving to expand its use of unmanned aerial systems outside its current mine monitoring and inspection activities and into the wider business.

Rio is among many in the industrial sector to turn to drones to more safely and easily survey and inspect their vast infrastructure assets.

The miner has been using drone technology in its Western Australian, Queensland and NSW aluminium, coal and diamond operations for the last few years.

It deploys a mixture of rotary and fixed-wing aircraft to undertake tasks such as surveying stockpile inventories, inspect draglines, remote survey work, and monitor pit/wall movement above underground block caving in its argyle diamond sites.

It is now looking at where UAVs could be applied elsewhere across the business.

“We see immense potential for drones to help extend the advantage Rio Tinto holds through the innovative use of technology, to improve the safety and productivity of our operations,” Rio Tinto head of technology and innovation Greg Lilleyman said today.

“Information will be the single biggest differentiating factor between the mining operations of the past and those in the future, and drones can produce a wealth of information to allow us to make better decisions.”

Traditionally, Rio Tinto has used drones to replace monitoring and inspection tasks that either presented safety risks for its staff or took up a significant amount of time, allowing the miner to remove staff from such situations.

Drones are also significantly cheaper than helicopters, and negate the need to buy or rent scaffolding and other equipment for inspections. Similarly, equipment can stay online during inspection, the miner said.

It’s preparing to trial UAV technology to monitor geo-technical issues in difficult-to-access areas, as well as for inspection of long stretches of infrastructure such as power and rail lines.

Lilleyman said Rio Tinto could also potentially use drones for tasks like monitoring remote turtle nesting sites and spraying weeds, as part of its environmental efforts.

“We are still determining the best methods for operating this technology at our operations,” the miner said in a statement.

“We are collaborating with the aviation industry including regulators to get this technology implemented and utilised in the safest possible way.”

The company has been one of the industrial sector’s biggest advocates for automation technology.

It expects to have 180 AutoHaul autonomous trains in operation this year, and has used driverless trucks provided by Komatsu for haulage in its mines over the past few years

Such efforts are run through Rio Tinto’s Mine of the Future program, which also boasts an automated drilling system and a central Perth-based operations centre whose employees control the company’s local ports, mines and rail systems.