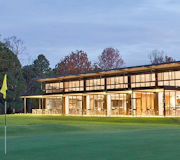 It was a great experience at the AIMS Mudgee Seminar in 2018 with a new venue and new format - one that was greatly enjoyed by around 60 attendees.

Friday night (23rd March) kicked off with a night of socialising and catching up at the new venue, Roth’s Wine Bar. This offered a new format with the option to sit or stand, sharing finger food and pizzas. This was a fantastic start with people mingling, catching up with old friends and meeting new ones, setting the scene for the presentations to follow on Saturday.

Attendees enjoyed the chance to sample the wonderful Mudgee beer and wine from local companies with some amazing wood fired pizza!

Saturday morning brought a change of venue again and a variety of presentations, not only from across the mine surveying community but also the land surveying and military community. The Mudgee Golf Club was the new venue, with its beautiful outdoor areas, amazing function centre and restaurant and we had around 60 attendees.

Our first presentation was from Erron Gardiner and Matt Brown on the integration of multiple data sets. The topic covered the combining, manipulation and presenting of data sets from manned aerial capture, drone aerial capture and laser scanner data in a mining environment. The benefits of being able to merge the different data sets taken from different platforms at different times not only allows time savings in capturing data presented to engineers but also for volume calculations and reporting. This is also trying to use the best survey tool for the required job.

Our 3rd presentation for the Mudgee Seminar was by David Ryan and Phillip Orr from O’Ryan Geospatial, David spoke about the process of preparing Mining Lease Application plans, ensuring the referencing of relevant legislation and accurate notations on the plans as required by the Department of Planning and Environment. Phillip then took to the stage and presented a number of old survey plans generated from the 1860’s right through to the 1990’s illustrating the differences in the drafting standards, Phillip also showed a number of field survey marks found during recent Mining Lease Survey’s carried out around the village of Wollar. Phillip also went on to show us some of the surveying equipment of the 1800’s. The 3 presentations concluded the “formal” part of the seminar and bought us up to lunch time.

After lunch the attendees were broken into groups and we moved around our event sponsors getting a short interactive demonstration of the latest technology they have to offer. This was a great opportunity for the attendee’s to ask questions of the sponsors or see how something works and was well received by both the sponsors and attendees alike.

With lots of things on offer in Mudgee there is no doubt that many people will be looking forward to returning next year for another great seminar.

Thanks to Matt Brown and the team from Conference Images for another very successful AIMS event!